Junior baseball has opened up many opportunities for Lauren. As a valued contributor on Malvern's Intermediate league team in Eastern Athletics baseball charter, Lauren loves taking the field every week and going out and trying her best.

Baseball is a family affair for Lauren, as she's following in her brother Jack's footsteps. She became involved in baseball five years ago after watching him play. "l got excited and learned to play the game".

Lauren is focused on herself and making constant improvements, and her intense determination has helped her go far. Her athleticism and willingness to work had earned her a spot on the Victorian Youth Women's Championships in April 2019.

For Lauren, her coaches feedback and advise has been invaluable as she progresses with her training. She credits the skills she learned from the State team as key takeways she's now using in her summer season with Malvern. Week-in and week-out, Lauren is showcasing her pitching and fielding skills to try and get the Braves into winning positions as they compete for the championship. No matter what the result is at the end of the season, Lauren is happy regardless because she loves playing for Malvern. “My club has lots of families and they’re really nice,” Lauren said. “It’s fun and it’s just a really good time.”

Lauren is especially interested in encouraging new players to join in and get involved in the sport. She stresses how important it is to give it time when starting out, just as it took her lots of practise to adapt to the rigours of baseball. "I would tell new players to just try it and if you       like it, keep going. It becomes more fun after you learn more skills". 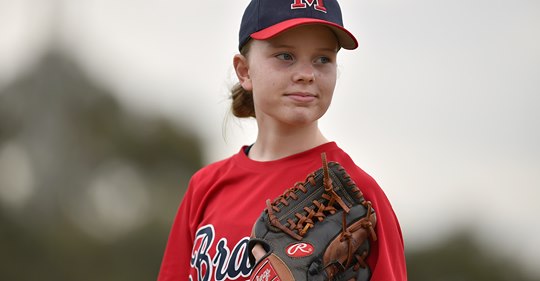 Patience Pays Off for Marcy Priamo in Her Athletic Ambitions

Macy Priamo has been playing baseball for as long as she can remember, and this year all her patience and perseverance paid off as she got to represent Victoria for the first time at the 2019 Australian Youth Women’s Championships. Now she’s setting new goals for herself as she strives for another amazing summer of baseball.

The 13-year-old first got involved in the sport at a come and try day at Malvern Baseball Club at the age of three. She liked baseball right away, especially because it was an interest, she could share with her big brother Hudson. Since then, Macy has blossomed at Malvern, transitioning from T-Ball to the Eastern Athletics Charter Girls team and further development opportunities.

Macy has always been on a mission to achieve her baseball dreams, which was evident even as a kinder student when she insisted on bringing her baseball bag to school to show her teacher and fellow students that girls can and do play baseball.

Over the years, Macy has gotten the chance to learn from Melbourne Aces players at school holiday clinics and train alongside decorated female baseball players like Abbey McLellan. Winning a premiership against Ormond Glenhuntly in the 2017 Eastern Athletics Minor B competition was another big highlight for Macy, and she also enjoyed playing for the Girls Charter State Championships a few years back. “It was fantastic to play with all the girls I know,” Macy said.

Currently playing as an outfielder for Malvern’s Intermediate League team, Macy is eager to have a great season with her friends while also sharpening her skills in preparation for the state team tryouts. After several years of wanting to play for the Youth Women’s State Team but being too young, she finally got her chance earlier this year, and she wants to continue improving and taking advantage of representative opportunities.

Macy she was thrilled to make the team and it’s something she will always remember. “It was very exciting because I’ve never made it into that stage of sport before,” Macy said. “Training for the tournament was fun a lot of time but as we started getting closer it became harder, although it was still fun.”

Getting to travel for the tournament and bond with her teammates was a great experience for Macy. She loved bringing home a bronze medal when Victoria came back from a six-run deficit to win 7-6 over Queensland.

Macy faced some high-pressure situations during the tournament, including coming into pitch against a tough NSW side and getting the elusive third out with a fly ball on one pitch. When she came up to bat in the next inning, she got on base and ended up scoring Victoria’s only run of that game. It’s experiences like this that have helped Macy learn how to get the job done no matter where she’s playing, especially with the support of her teammates.

“I learned how to be more independent, and I got better at skills like base running and reading plays.” Macy said. “My teammates were really nice and they were good influences. If I did something wrong they’d tell me how to do it or if I needed help with something they’d help me.“

Exceeding expectations with the 2019 Youth Women’s Team left a lasting impression on Macy, as she definitely wants to try out again and improve her hitting now that she’s swinging a heavier bat.

Playing at Malvern has prepared Macy for a bright future, not only on the state team but wherever her baseball journey may take her. She spends a lot of time at the club with her family, from dinners after training to game days and more.  This year, she hopes she and her fellow Braves can go far in the competition. “I want to win games, we are second on the ladder and I hope to just have fun and learn more about baseball,” Macy said.

Macy has a lot of people she can learn from at her club, and she also looks up to her state team coaches, including Ursula Howard, Siobhan Stephenson and Kelly Manzie. “They taught me how to be like a smart baseball player, someone who knows what’s going on all the time,” Macy said.

While baseball is undoubtedly Macy’s main passion, she has also tried dance and gymnastics in the past and currently enjoys her role as a flier with her cheer team at school, as well as playing basketball and participating in Girl Guides. When she does get free time, Macy loves cheering on her favourite team LA Dodgers and her favourite player Mookie Betts of the Boston Red Sox.

No matter what her future has in store, Macy looks forward to getting out on the field for a long time to come. “Baseball is really fun and you get to make new friends that aren’t at your school,” Macy said. “Baseball is also a great active sport to keep your healthy.”

Mom Shahan Priamo is proud of how far Macy has come from her T-Ball days. “Baseball is something she’s been doing for so long, she just kept trying,” Shahan said. “She has a chill attitude and just does it, and to see her in the blue with the white V was amazing. I just want her to follow her dreams and be her.” 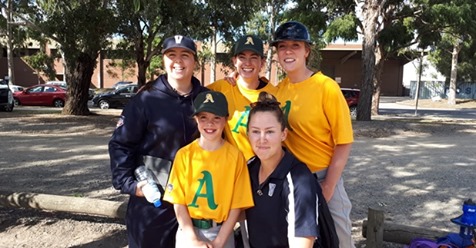 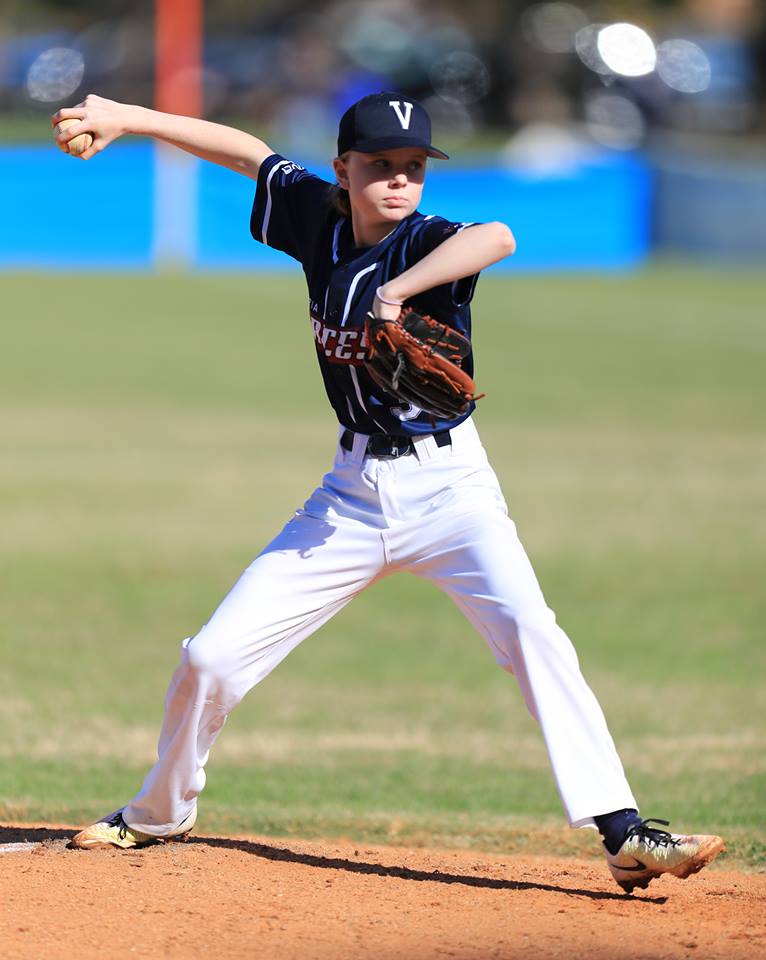 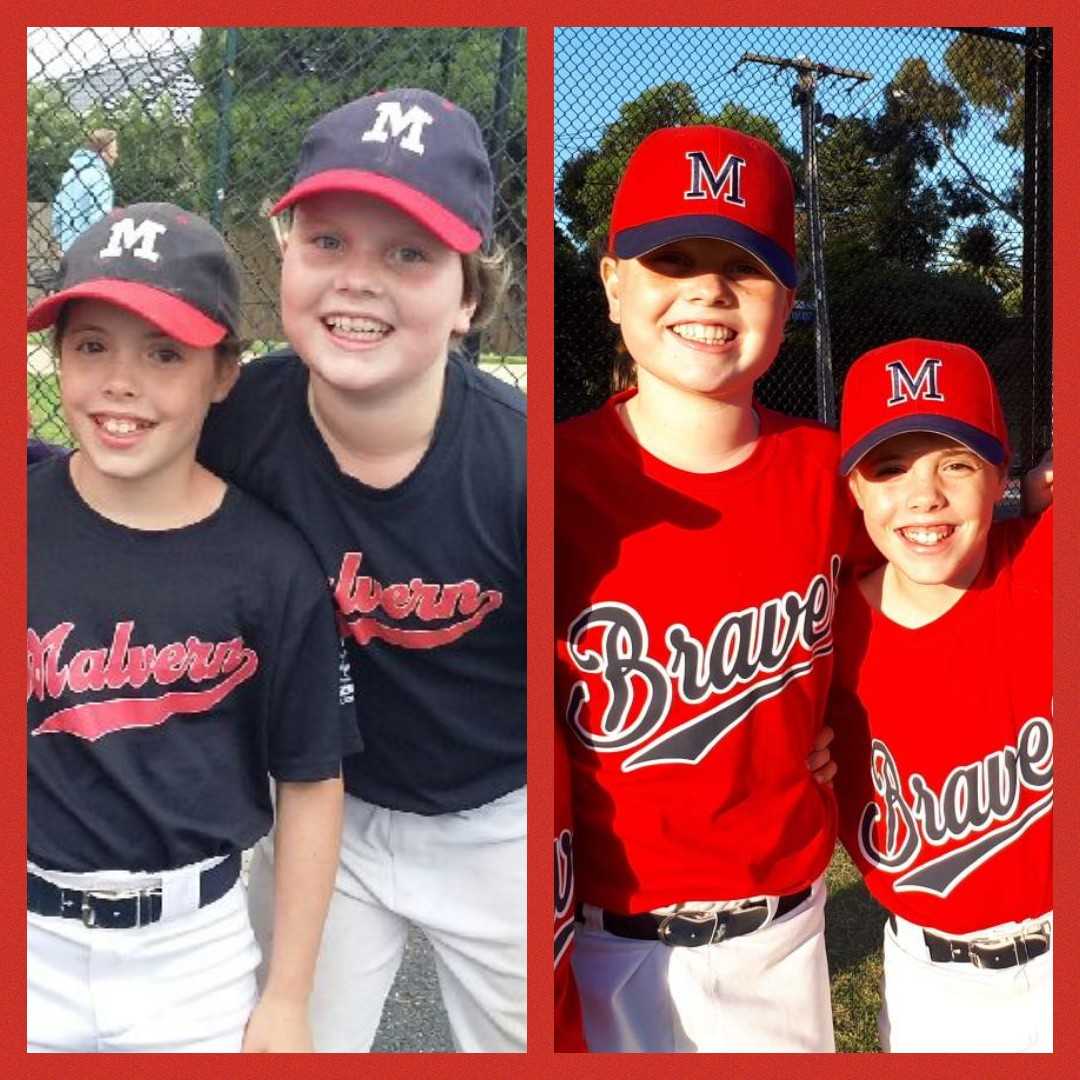